OMG I am so out of shape - it was pylometric cardio circuit (or as I dubbed it My Own Personal Hell). I couldn't do all the rotations and had to stop a lot - yowza - but I perserved and it will get better - just like the 30 minutes of running. It a good workout and I feel better once I've done it (yeah me!) hopefully it will get easier and I will only get better :)
Posted by Italia girl at 5:27 PM No comments:

Nothing terribly new on the homefront. Still hopeless, madly and over the top in love with Paul. He'll be here in 54 days. Work is good - not too busy but good. My boss had a baby boy (5 weeks early) - his name is Max but he's doing okay.

My "newish" thing is losing weight. It's newish only because I've always been trying to lose weight. I've been running and watching what I eat. I also ordered INSANITY - yes it was off an informercial that I saw early in the morning - I started it today with the fit test - I almost thought I was going to puke. I am really excited about it - it's a series and it will be interesting to see how it works out. This blog will help me be accountable - I hope. 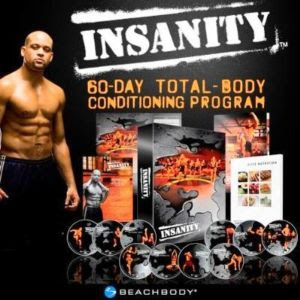 It's also earth day today - so this computer and lights go off in 32 minutes. It will be interesting to go out on balcony and see what's on and what's not. 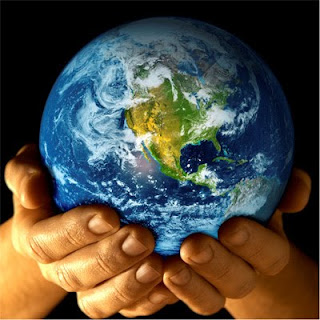 The play (A Tailor Made Prince) is going well. It starts in 19 days and I'm excited about being on stage and also about performing in the new theatre - then it's nothing until I am stage managing JP's play - Paradise Island which goes on this summer.

So it's a good feeling when a contentment and a happiness sets in your life and you are a peace and feels like all in right with the world.
Posted by Italia girl at 4:37 PM No comments:

So my old car has gone to car heaven. Last Thursday I put new battery in the car, changed the oil and put tranmission fluid in the car (about $250.00 in total). This Saturday I head to the clinic (for my yearly physical stuff) and see the line and decide that maybe I better come back the following day- got into the car annnnddd it wouldn't start. I called Joe (because Paul would have taken too long to get there). He got the car started and followed me home. I decide to head to Canadian Tire - the car stalled twice once at the Supercentre and again in the merge lane going to CT. The nice man in the car behind me pushed me to the side of the road, I head to CT and ask for help but they can't do anything because of insurance reason (did I mention I was no more than 10 feet away from the parking lot). Now yesterday was rainy and cold and the first car that stopped couldn't help me (because "they were in a hurry") the second nice couple said no problem pulled away and NEVER RETURNED. I finally flagged down boy on bike who let me push the car while he steered. Finally got the car into parking lot. About an hour later the nice mechanic comes out and says the timing belt and F'ed although he was much more polite about it. To fix that would be 300 to 500 and he couldn't even guarantee it would work, and it would be thousands (no not hundred boys and girls thousands of dollars to fix it).

He looked around and said "I shouldn't say this but do you have any emotional attachment to the car ." I say "No." and he says "Get a new car."

So I am now the proud owner of a 2006 Ford Focus and 5 years of car payments. I get possession tomorrow (and am quite excited about it). 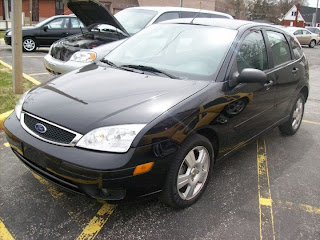 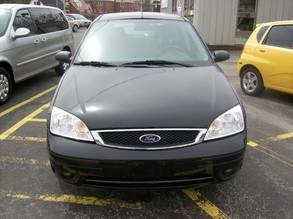 The best damn promise anyone has ever made me 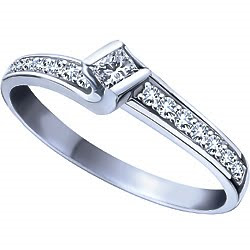 It's a promise ring, it's from Paul and it's the best thing I've ever worn.
Posted by Italia girl at 5:33 PM 2 comments:

...when you've met the one. I have seen those sappy movies where the woman goes out meets someone comes back and says "I met the man I am going to marry." and of course in the sappy movies they always do. And I having met Paul (again) have been giving it some thought about him and past relationships. I do recall saying about another boy that he "could" be the one or "I think he's the one." to someone. But how do you really know?

Do you pick the man who takes you good and bad? I mean don't most people who are your friends take you good or bad. Why don't we marry our friends. How do you know he's the one. Because he calls when he says he will, because he's the person you think about most, because he shares the same goals you do...seriously when do you know.

Many of my married friends say "You just know." but do you, do you really? And if the marriage ends in, God forbid, divorce do you then start expressing doubts you had.

What do I know you ask? I know I miss him when he's not around; I know when I get an e-mail with his name attached or the phone rings and it's him I smile even before I open the e-mail or answer the phone. He could read to me from the phone book and I would still think it was a great conversation (and yes once when we were 16 he did just that - can't even remember the context but it makes me smile). I know that I haven't even met his kids and I already think they are two of the most special people I will ever meet. I have talked to both and they are smart and funny and really great kids. And I know that when he walked off the plane my heart skipped a beat - I saw him and it was as if no time had passed and he was the same boy I fell in love with at 16.

But this could be true for a lot of other men too (except for the in love with at 16 bit). Could I potentially meet someone else who could eventually make me feel the same way. The romantic part of my says no, he's your other half, the piece of you that's missing but the intellectual part says - really Paula don't be ridiculous you are a whole person whether you are with someone or not, and at 37 the intellectual part of me knows that's the truth. As a human being we crave company (which is why solitary confinement is a truly horrific punishment) but we get that from friends, co-workers, random everyday people so why is the romantic kind required - it's not, people go through their lives never having knowing what it means to love someone or be loved in return. Divorced people may never marry or date again.

So how do you know. All I know is that he is the one and I can't imagine being apart from him again.

Lastly I recall once when I was 16 and we were lying on his bed I thought to myself "this is the man that I am going to marry" So I guess you do just know even if you have to wait 22 years later.
Posted by Italia girl at 4:58 PM 1 comment:

I met a fella when I was 16 and he was many firsts for me.

- I said "I love you" to someone who wasn't my family.
- I heard "I love you" from someone who wasn't my family.
- I cried in someone's arms who I knew loved me and would protect me and never ever hurt me.
- I was intimate in a way that is so special it is never ever forgotten.
- I had my driver's license and we drove everywhere together.
- I realized that some times you meet someone who is perfect for you in every way and completes you.
- I realized that sometimes ending a relationship is the hardest thing to do but at the time it's the right thing.


I moved to Ontario, he stayed in New Brunswick. I had serious relationships that were just that, he married and had two beautiful children.

Recently I ended a serious relationship. He and his wife decided to divorce. About 2 months ago he contacted me (thank you Facebook) and the 22 year gap seemed to vanish in the blink of an eye. We started talking as friends and somewhere in those talks we realized we still had feelings for one another and they grew deeply and quickly.

He spent the last week here and it truly was one of the best weeks of my life - I truly believe that this time, this second chance, is a rare chance that not everyone gets is one that I will grab onto and hold onto tightly.