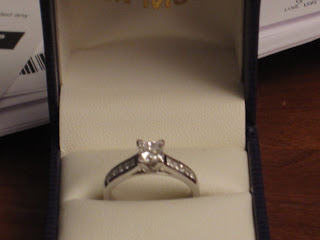 So by now you must know Paul and I are engaged - here's the story:
Paul and I were on the phone on Thursday before his flight and before I hung up, I said "See you soon, don't die in a fiery plane crash." and he said okay.
I make my way to the airport and upon arrival look for Paul's flight.....I can't find it ANYWHERE. 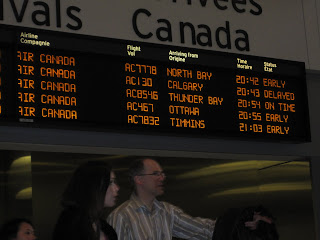 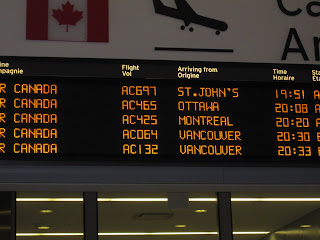 I make my way to arrivals and still nothing. So of course I'm all like OMG he died in a fiery plane crash. You can see the flights listed;St. John's is there but no Saint John. A few minutes later he comes out looking o' so sexy. I walk over and hug him and we give each other an inappropriate airport kiss. I am holding his hand and start to walk away chattering away "your flight wasn't listed etc etc blah blah blah" He pulls me back and I half turn back to him and he's on one knee with the ring box. I say " What are you doing?" (very romantic eh?). He opens it and says "Paula Lumini I love you. Will you do me the honour of becoming my wife." I say "Oh my God"....repeatedly. I must have said it like six times before it dawns on me I haven't given him an answer yet. Then I can't seem to say anything. I nod my head vigorously, get all teary-eyed and say "Yes, I will marry you." He stands up and hugs me, places the ring on my finger and the everyone in arrivals applauds. I turn around and say "thank you." We go to the Tim Horton's everyone is congratulating us - and that's the story of my marriage proposal. Most awesome story ever, well I think so mostly because it belongs to Paul and I.
Posted by Italia girl at 7:45 PM 2 comments:

My cat has ADHD 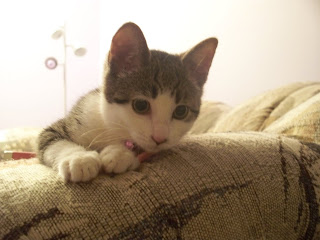 Since Paul's youngest has ADHD I thought I would do some research - the kids and I are meeting in July and I want to be somewhat informed. I learned that the most prevalent symptoms of ADD ADHD are inattention and distractibility, hyperactivity and impulsive behaviors. Difficulties with concentration, mental focus, and inhibition of impulses and behaviors are chronic and pervasive and impair an individual’s daily functioning across various settings -- OMG I was shocked, suprised and a little stunned. Pepper Static, my not yet nine month old kitten has ADHD...or at least all the symptoms. For example she was bugging the dog so I attempt to distracct her with a kleenex - stop laughing it works - so looks up and begins to come over to investigate but somehow in the 8 to 10 steps coming over a candle (not lit one that's been sitting there) grabs her attention the kleenex is lost - inattention. As for distractibility did you hear me mention the kleenex. Impusive behaviours - one minute she's lying quiety next second she has to be in the next room for some reason RIGHT AWAY! If the dog runs to fetch a toy the cat freaks out. However I don't think she needs kitty meds because her daily funtion isn't impaired.
In all seriousness I am asking parents with children with this to give some advice on relating to Paul's little guy.
Thanks!
Posted by Italia girl at 6:11 AM No comments:

You can learn things about yourself even at 38

So I've been sick (really sick) for the past three days. There is this whole issue of staying home and not infecting the rest of the office which is a great idea....in theory. What happens when you can't do that. It's a well known fact that most stuff is contagious before the symptoms appear http://www.medicinenet.com/script/main/art.asp?articlekey=42618 is a great article about should you go to work or not. It's worrisome that it suggests you could get fired if you are out for longer than three days if you haven't been there for a year.
Anyway I digress. I learned a couple of things about myself - when I am very sick I am a big baby - this isn't new I knew this. I had to go to work - there was a major project that I had to do, yes once again the powers that be decided instead of telling more than one person they put it on me - I have always wondered why; what would happen if I was hit by a bus. Who would do the work then, again I digress. I woke up on Monday feeling horrific, sneezing, sore throat, coughing, muscles aches, fuzzy head oh it was awful. I somehow got up, walked the pup and dragged myself to work Monday and Tuesday and got the project done but it was awful - extremely awful - Monday being the worst of the two days. So I learned that when you are at your worst you still have something deep down inside you that you can push through and get done what needs to get done.
I have often wondered what single or stay-at-home moms do when they are that sick and cannot get up but have to to take care of the kids. I often wondered when I have kids will I be a bad mom if I cannot get up to take care if the baby. I now know I can because I have that thing deep down inside that all moms must have to get up and do what has to be done and that's not a bad thing to learn about yourself. To think I learned it at 38 :)
Posted by Italia girl at 5:43 AM No comments: