And they call it HUMANE?? 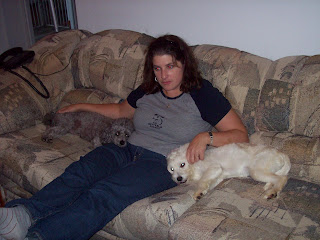 So we decided to get another dog to keep Cosmo company during the day and spent literally like a week and a half at the Humane Society going every day and introducing Cosmo to other dogs because it is the Humane society's policy that dogs do what's called "Meet and Greet". There were some meets that went fine and some downright not good meetings. Rich the shiuzu was a good match but were down on the list (it's first come first serve) and then we met Kyra (now named Kiri) and six month old terrier cross - first meet and greet went okay. The second meet and greet was in the atrium and we realize Cosmo HATES the atrium. It's loud, distracting and there is no neutral territory. So he literally sat in my lap and shook - keep in mind Cosmo has never been socialized with other dogs except for a few months when he was pup. He didn't know how to act around other dogs.

Crystal and the HS was awesome, she was the one that suggested Kiri in the first place. Jenny was the one who put them in the atrium. The next day Kiri and Cosmo spent TWO hours together and did fine, they were interacting and there was no fear - oh did I mention it was outside and Jenny was observing. We put in the application and they tell us to come on Monday and pick her up. We ask "do we need to bring Cosmo" they say no.

So Monday rolls round, I work through lunch so I can leave early and get there. Long story short I get told that a complaint was put and it was suggested because of the "fear" Cosmo displayed we shouldn't get the dog and I asked if it was Jenny who made the complaint. And sure enough it was. I was then told we wouldn't get Kiri unless a manger saw a meet and greet - so I have to race home, get Cosmo and race back. Long story short they were fine and we got Kiri.

I should point out that I have never met anyone so negative as this woman. It was like she wanted Kiri for herself. She told a volunteer that we had said that the volunteer "shoved us" out of the corral - that was lie and she actually said "Look I told you I would try and find a match for your dog and you obviously want this dog even though I don't recommend it." I feel like I should make a complaint. She's supposed to help dogs find homes.

But we got Kiri and below are some picutres of our six month old little terrier cross. 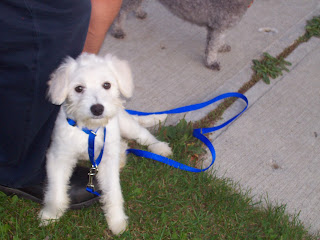 And by the way - she and Cosmo played for 40 minutes off leash in park tonight! 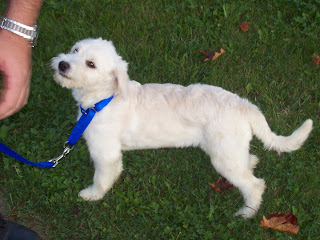 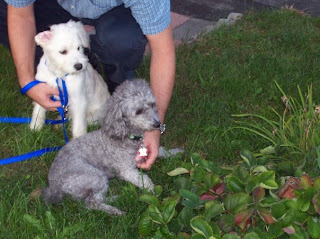 I don't know what they are looking at but they have the same expression
Posted by Italia girl at 5:04 PM No comments:

I have realized that this has been too long in coming and a lot has happened. I have a new job which I started in May - I work at Gowling Lafleur Henderson for two great lawyers. David does general litigation and Adam does construction law. Rachel and I quit JRC at the same time and started at the same time. She works as wordpro specialist.

I am in yet another play with KWLT - Captain Hook's Revenge - I play Plague the swashbuckeling rat and my friend Kristy play Bubonic (get it rats...bubonic plague - ha ha). The first read though is the tomorrow night. It's the first time I've done a family play that I hope we get a lot families out.

We also have my new baby who has been living with us for 2 weeks now - Cosmo. He is a 7 year old miniature poodle and absolutely adorable. Tomorrow we are picking up our 6 month old new pup - Kiri . Right now Cosmo pretty much ignores her but we are hoping they become fast friends. We will be crate training her so that should be interesting. I will be posting pictures of her in the next day or two . Below are some pictures of my little man. 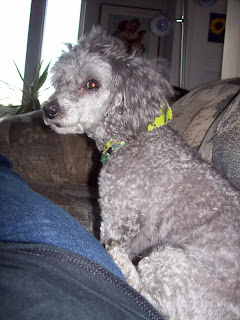 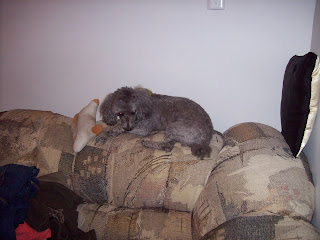 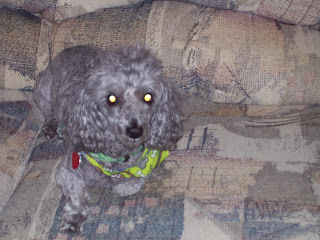